The class is called Strictly Strength. The title and description intimidated me right off. I am not strong, strictly or otherwise.I imagined kettle bells and giant weights and me, collapsed on the floor, begging for the water bottle I inevitably forgot to bring.  Being sick a couple years back took all the muscle I had away, and strength has been a bit elusive since that point.

So while the sound of it was terrifying, the promise was worth the risk. I jumped in as the class newbie.

Surprise—there are levels to being strong. For just about any move the instructor taught us, she explained that there was a level one and a level two—or even three. There are options! There are large weights, and there are small ones. There are heavier bars and lighter bars. (And now I know I have to get there earlier if I want a lighter bar.) There are moves that test your further than other, easier possibilities. I did not have to walk in the room and lift a kettle bell above my head on the first day. Thank you, sweet eight-pound baby Jesus. That would have been ugly.

The most important thing I learned right away though—

There is no shame in staying at Level One.

Oh, I want to be at Level Two. I want to do the harder twists, the longer planks, the tighter crunches. But the part of me that is tired of injury remembers that is why I am doing this—to avoid hurting those parts of me that have gotten bruised, pulled, and pained by doing too much.

So I keep it slow. And steady.

Other people can do the full planks. I stick to the hands and knees ones. Someone else may be able to do double leg lifts. I will happily do them one at a time. Maybe one day I will do those harder things, but right now, I’m at Level One. And that’s an OK place to be. 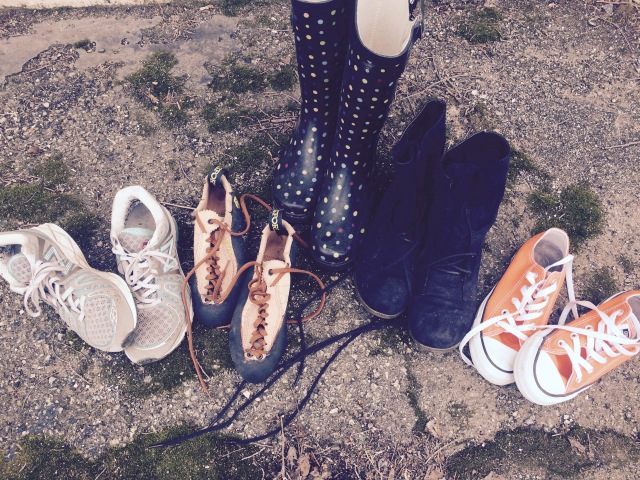 Church Has Levels, Too

Some of us show up to church at Level One. We don’t know the songs. We aren’t comfortable singing in public, anyway. We get part of what the pastor’s talking about, but some of the things are fuzzy, and we’re not sure how they apply to our situation. We don’t want to volunteer, because we’ve been burned out, and we’ve been called out by the person who felt we just couldn’t get it right. We don’t understand the unspoken cadence of the service that informs everyone else to stand up, sit down, or dip the bread in that cup rather than drink the juice.

Everyone else seems to be at Level Three, at least.

We want to be. We want to pretend we know the lingo, act like we’ve got our life together. But then we remember why we’re there—because we want to stop the hurt that happens when we are fake. We hate the bruises, pains, and sprains in our hearts over trying to be what we’re not.

Maybe church is a place where it’s OK to be at Level One. At least, we hope so. We long for grace for those who aren’t quite ready for the heavier lifting. We pray there is kindness for the ones who need the lighter weights, and we wish for others who can bear more to offer us their shoulders and their lighter burdens. We hope that, if anyone notices we can’t do what the seasoned attenders can do, they will not point that out but treat us as if there were no differences at all.

There is no shame in staying at Level One.

If you’re trying church for the first time, or if you’re back for the first time since something there hurt you immeasurably, don’t push it. Don’t expect to be lifting the 25-pounders your second day. Don’t think you have to know all the moves in order to fit in. Embrace awkward. Know that you don’t know and that it’s OK. Know that sometimes you can’t manage whatever task it seems everyone else is taking on, and that’s OK, too.

It doesn’t really matter how long it takes. I makes not one bit of difference how long you have to keep doing one leg lifts. You’ll get there. You’ll grow stronger. Maybe one day you’ll see that person who doesn’t seem to know the steps and you’ll say to yourself, “Oh—I remember that. I’m stronger than I thought. I think I can be a shoulder for her.” That day, you’ll be the grace someone else needs to poke her head in the door and say, “Maybe I’ll try this. It’s scary, but maybe it’s just what I need.”