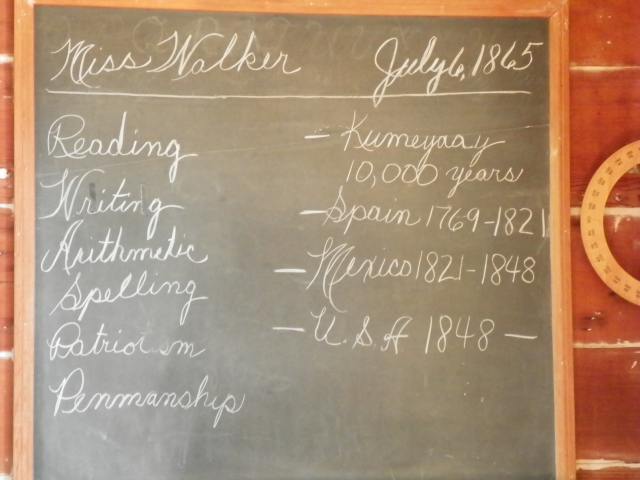 The principal called me into the office to “talk.” No, I wasn’t a student in trouble. I was one of the teachers. She folded her hands across the desk, looked at me and informed me that I had a “couple” in my homeroom that I needed to do something about. They were displaying “poor judgment.”

Couples in high school and poor judgment are rarely mutually exclusive, but I didn’t see how that was something requiring my intervention. As delicately as possible, she informed me that the girl in my junior homeroom and her senior boyfriend would struggle because they came from different backgrounds. Their minds and future plans were unequal. Their family expectations completely at odds. It wouldn’t be healthy. I needed to talk to the young lady and explain to her why this relationship could not be pursued.

I may have recently graduated with honors from one of the nation’s best universities, but it took several minutes for young, naive me to grasp the clear subtext hanging above both our heads. My student was white. Her boyfriend was black.

I played innocent and wondered aloud why the students should be broken up and not allowed to come to this conclusion themselves. I defended the young man as a very nice boy that could be good for a scattered, confused, and conflicted girl. I explained that surely this job fell to her parents if they felt concern, not to me.

I did not confront what I knew I heard. I hoped that if it appeared I couldn’t imagine race as a consideration for the relationship’s demise, maybe she would realize that it shouldn’t be.

A few months later, when choosing ideas for argument in the debate class I taught, the topic of mixed race marriages came up. I let them debate it. I didn’t get called in again, but the grapevine told me of her deep displeasure. I still did not understand. It was a Christian school, right? So everyone would be considered equal in a Christian school, right? Isn’t that what Jesus taught?

I had no clue, at 22, the depths of what I was dealing with.

When the Ferguson protests erupted several years ago, I couldn’t make sense of all the things I heard. I had taught school right in the middle of the Ferguson-Florissant area. It wasn’t like that. Our black and white students got along fine. Everyone was happy. Had things changed so much in the ensuing decades?

In the last few months, I’ve revisited those days. I have thought about those black students. I’ve put on new lenses and discovered a few things I missed.

One thing I missed was that there were exactly two black students in each high school class. I’m pretty sure this is accurate, looking back. I didn’t notice it at the time. Did we have a quota? Did we have a number of students “like that” we allowed in each year to show how benevolent we were?

Now, I remember they were usually the students with the lowest grades. The young man in the dating scenario above could barely read and write above a grade school level, though he was a senior in high school. At the time, it angered me that he had come so far and no one had done anything about that. How was I supposed to catch that up as his senior English teacher? I assumed, though, it was part of his background, not part of his education.

In fact, I went along with all the assumptions about our black students—that these were underprivileged children from whom not much more could be expected and, though no one ever said it, wasn’t it good of the school to provide them with a place to be for six hours that was Christian? God knew what happened when they went home.

How is it that no one ever said these things yet no one questioned them, either? How is it that kids I remember as smart, capable students still got marked down for their “attitude” while their white peers’ equal attitude got indulgent smiles and assumptions that they would someday make good leaders?

I wonder now what happened to that very gentle, kind young man whom we failed. It never occurred to me that teaching the token students wasn’t really a priority.

The black students were also often the ones most in trouble. Not in my classes. My most troublesome students were generally sons of the church elders. Yet several black students whom I found engaging and lively in my classes told me tales of detention and punishment because they mouthed off or talked too much class. Those detentions happened a lot. They interfered a lot with my speech and theater groups. It didn’t occur to me that my white talkative, sassy students—whom I also enjoyed—didn’t view the inside of those detention rooms with such regularity.

One of those church elder’s sons vandalized my car his senior year. The same principle asked me to forgive and forget. She didn’t want the boy to have a record. She didn’t want his future to be in jeopardy. Bringing in police would harm our reputation. More to the point, she didn’t want his parents to stop contributing. I conceded, not because I agreed but because his co-conspirator was already 18, and I didn’t want that young man to have a permanent police record.

I wonder now what would’ve happened if one of the black students had vandalized my car.

I wonder now if the black and white students really did get along so well. I wonder how many black students were invited to the white students’ parties or on a Friday night drive around town. I wonder what the lunch room looked like that I don’t remember ever visiting. I never heard or saw racial intimidation between students. I never noted any animosity between them. Yet I rarely saw intentional inclusion, either. I wonder now how much code-switching those kids had to endure at a young age in order to fit in.

I’ve learned a few other things since then as well. I’ve learned how many Christian schools were founded not so that students could be kept safe in a Christian bubble but so that they could be kept safe in a white bubble. Given the location of the school, I feel certain of this heritage. Ferguson-Florissant has changed in the ensuing decades, but not that much. I simply didn’t see what was around the edges of the bubble. I didn’t see that I was teaching in a refuge of whiteness more than a refuge of faith. Or that some there conflated the two.

I couldn’t have known any of that, commuting as I did from a surprisingly more diverse area a half an hour south of it. I didn’t know it fresh out of my own university bubble where the only minority students I ever really interacted with were the Jewish ones, because at Wash U, they weren’t a minority.

I am processing all of this now. Realizing much of it just now. I haven’t thought about those years in a long time. I’m processing that the curriculum we taught has long been considered an extremely white-centered curriculum. It’s also extremely popular among Christian home and private schoolers. I knew none of this, because I knew nothing about racism other than that it was something that happened on the south side of Chicago and the north side of St. Louis. I didn’t grow up around it, so it didn’t exist.

Our school books contained such gems as a poem about Robert E Lee being a kind and gentle person who would never hurt a bunny, much less a slave. At least, that last was the implication. Our history books taught my students that most slaves were happy, cared for, and lucky that they came to America so they could hear about Jesus.

I wonder what our eight black students thought about that. I bet they never said.

I kept those books for decades, because I enjoy having anthologies of literature around. Now that I’d like to look at them again, to examine the specificities of what I taught and whether I ever saw the bias inherent in them, I finally tossed them into the recycling last fall. One of those few times decluttering has bitten me in the butt.

I taught those things. I thought them to impressionable teenagers. I want to say that my material couldn’t have covered such dubious revisionist history since I was their literature teacher. But literature has power. Words build up or tear down. Ideas in literature have fomented revolutions, brokered peace, and empowered abolitionists. Words matter, and when we choose which words and whose words to include in our children’s education, we choose the ideas they will believe. I suspect I know what words I would find in those old books.

I think about all these things now because I must. I didn’t think about any of them then because I didn’t have to. This, I suppose, is my point. As a young English teacher, grateful to have a job, any job, teaching I never saw what I didn’t see. I never knew what I didn’t know. Yet, I did participate in racism.

I rebelled at it when I saw it in school administration. I embraced the challenge of debating racial issues in class, thus knowingly thumbing my nose at said administration.

But I didn’t question the underlying assumptions of the entire school philosophy. I believed in the subtle superiority they taught me. Because of that, I know now that whatever racism those eight students in the high school experienced, I played a part in it. It wasn’t intentional. It didn’t have to be.

One of the things I’ve learned in my dive into racial inequity is the chasm between intent and effect. White people like myself usually focus on intent. Since we “don’t have a racist bone in our bodies”—since we can’t imagine intentionally inflicting racism on someone—we assume we’ve built up a kind of immunity when it comes to causing racial harm.

I had the best of intentions.

If I didn’t mean it, it didn’t happen.

Problem is, what people of color experience are the effects, not the intentions. If I didn’t mean to leave the cabinet door open and my husband cracks his head on it, he’s still got a throbbing bruise. 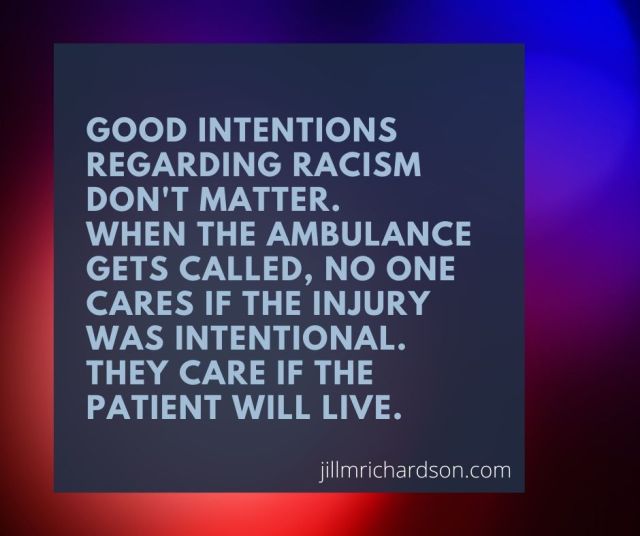 It’s helped me a lot to realize that the excuse of “good intentions” feels good to me because it lets me off the hook, but it doesn’t feel good at all to the person who has been hurt. When the ambulance gets called, no one cares if the injury was intentional. They care if the patient will live.

Another thing I’ve learned is that it does me no injury to say I’m sorry. I lose no ground. I lose no face. I lose nothing in the act of apologizing for harm that has been inflicted, intentional or not. It is purely pride that refuses such humility, and pride has no place in the kingdom of Jesus.

So students, wherever you are, I am sorry. I didn’t know. But now I know better.